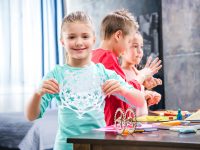 Parents often use both reinforcement and punishment as tools to modify their children’s behavior or to help when working to improve their developmental skills, like sensory processing or fine motor skills. The main purpose of both negative and positive reinforcement is to boost the rate of specific behavior, but they have various differences and similarities.

When you introduce the “reinforcement” concept to someone, they become encouraged or motivated to perform a repetitive behavior, which is either:

Differences Between Positive and Negative Reinforcement

Positive reinforcement is an operant conditioning concept that presents a desirable reinforcer, so the person repeats their behavior.

Negative reinforcement is an operant conditioning concept that presents specific reinforcers that increase the person’s behavior to avoid the reinforcers.

Operant conditioning is a form of associative learning where reinforcement or punishment modifies the strength of the behavior. It’s also something used to bring about such learning.

Some examples would be:

Some examples would be:

Like with reinforcement, the technical meanings of negative and positive punishment refer to removing or adding a factor in order to obtain the results. They don’t refer to the impact or quality of the punishment.

Both punishment and reinforcement can modify behavior. However, the difference between them is punishment is meant to reduce the behavior, whereas reinforcement is used to increase the behavior. But these definitions are different from how we use them in day-to-day life. Usually, in speech, the term “reinforce” means “emphasize”, while the term “punish” means “hurting”.

To learn different uses of positive and negative reinforcement to help modify your child’s behavior, you could talk with their pediatric occupational therapist for some ideas.

Does your child have difficulty with one or more of the following?

WriteSteps is located in the Torrey Hills suburb of Carmel Valley - just north of La Jolla and east of Del Mar. The office is approximately one mile east of the 5.